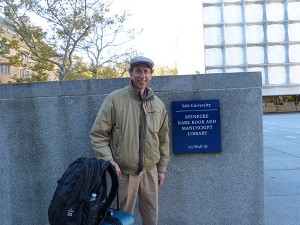 A book artist and poet, Rick Black has loved the poetry of Yehuda Amichai for many years. He felt as though he had found a sensibility akin to his own. He loved Amichai’s poems about family as well as those about love and war.

Born and brought up in Bergenfield, New Jersey, Rick equally loves the book arts and poetry. He has studied various facets of bookbinding with Maria Pisano, Susan Mills, Carolyn Chadwick, Yukari Hayashida, and Carol Barton, among others. He has participated in national book arts and fine art exhibitions.

In fact, Rick has just recently been named the 2019 Isaac Anolic Jewish Book Arts winner. He has also won numerous awards for his poetry. His poetry collection, Star of David, won Poetica Magazine‘s 2012 Chapbook Contest and was named one of the best poetry books of the year by Split This Rock. You can listen to Rick’s reading of Star of David in the Hebraic section of the Library of Congress.

For more than twenty years, Rick worked a professional journalist, including a three-year stint in the Jerusalem bureau of The New York Times. He reported during the first intefada and the Persian Gulf war in 1991. He also freelanced for numerous national newspapers and magazines, including The Boston Globe and The Los Angeles Times among other publications.

After returning to the States, Rick was walking down 27th Street in New York City when he saw a huge banner, “Center for Book Arts.” Inside a well-lit studio, he fell in love with the poetry broadsheets, the huge guillotine paper cutters, the old-fashioned book presses and Vandercook printers. He started taking classes in basic bookbinding, miniature books, pop-ups, Japanese bookbinding and other subjects.

Two years later, he founded a small poetry press. He named it to reflect people’s need to slow down and share each other’s light—hence, Turtle Light Press. Two years later, Black suggested a limited edition artist book of Yehuda Amichai’s work to Amichai’s widow, Hana–and the result has been the production of The Amichai Windows.

Rick Black offers a few talks and workshops for university libraries and classes, synagogues and JCCs.

When he’s not working, Rick spends time with his wife, Laura, and their daughter, gardening and reading in their home in Arlington, Virginia. He is a member of the Pyramid Atlantic Art Center in Hyattsville, MD, the DC-Area Literary Translators Network, the College Book Arts Association and the Washington Rare Books Group.