“From his earliest poems, archeology has been a primary source of metaphors for Amichai’s perception of the human condition,” wrote Robert Alter, a Hebrew translator and literary scholar, in a New York Times magazine article in 1986. “He sees both the self and history as an elaborate depositing of layers in which nothing is ever entirely buried from sight, in which the earliest strata uncannily obtrude upon the latest.”

Alter maintains that archeology gave Amichai a different way of conceiving of time. In contrast to the linearity of Judaism and Marxism, and their messianic optimism, archeology gave him “a sober alternative.”

In my view, too, Amichai has more of a cyclical conception of time, a more rounded conception of the way that objects — and people — from different periods circulate in and out of our lives. In fact, the cyclical nature of time is one of the main themes of The Amichai Windows.

Clocks appear in all guises — with clock hands attached and not attached, in the form of ancient Hebrew letters in place of numerals and otherwise. Or I weave in a windmill — that is located next to Amichai’s old home in Yemin Moshe in Jerusalem — with its arms circling round, always round.

Here are some lines about time from Amichai’s poem number “28,” which is one of a series of numbered poems from his collection, Time, and that appears in The Amichai Windows.

“I am a clock-hand that has run away
from its dial but cannot forget its circling movements.

When I go straight toward my endless end,
it hurts because I know only round.”

In The Amichai Windows, I reflect Amichai’s love of archeology, of objects and people getting buried and reappearing in one’s life, by creating a collage of images — some hidden, others not — that draw from various periods of his life. Or from Jewish history in general. Sometimes I even sneak in bits and pieces from my own life, too. All of the time, though, the images refer the reader back to the words of the poem. I want to enhance them and create visual links to different ideas of time and various eras.

Here are some of Amichai’s own lines about archeology from his poem, The Jews, which also is one of the poems in The Amichai Windows.

“The Jews are not a historical people
and not even an archaeological people, the Jews
are a geological people with rifts
and collapses and strata and fiery lava.
Their history must be measured
on a different scale.”

Sometimes, I incorporate direct images of archeological sites such as the Qumran caves by the Dead Sea. Both of the images in this blog post, for instance, appear in The Amichai Windows, but they are manipulated and made into a collage with other photos to complement the poems. While I can’t show the actual designs of the poems (at least, not yet), I hope you’ll enjoy seeing these images and get a sense of how they’re intertwined with the poems.

“I am drawn to people who are concerned with real things, like archeologists and geologists,” said Amichai in an interview with Chana Kronfeld, a Hebrew literary scholar and one of his translators. “That is really pure poetry.” 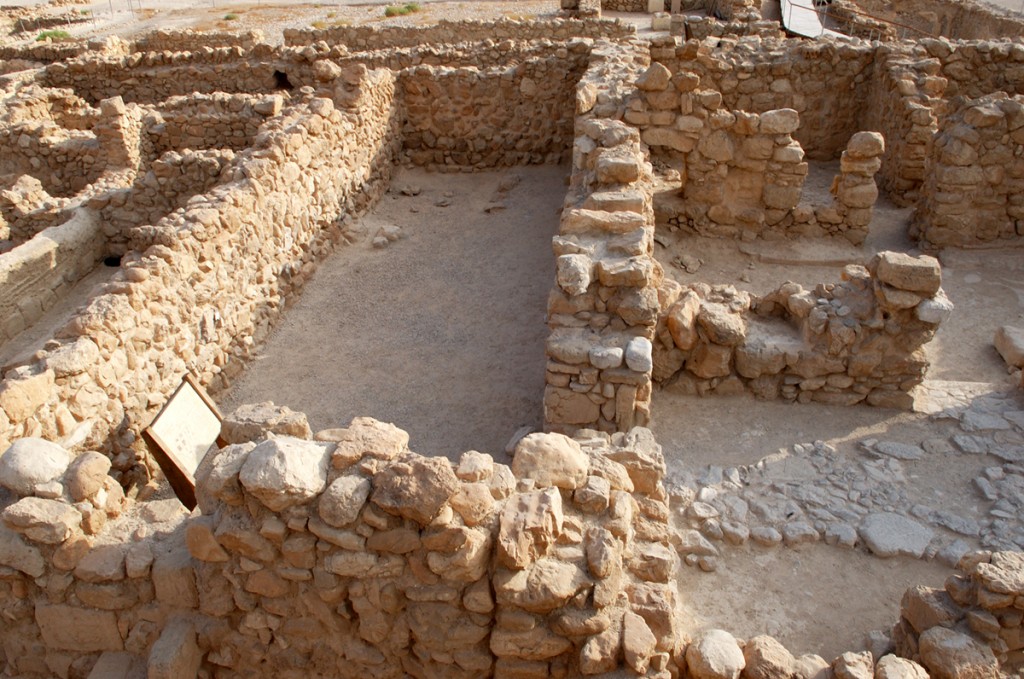 The scriptorium of the Qumran sect that lived by the Dead Sea.